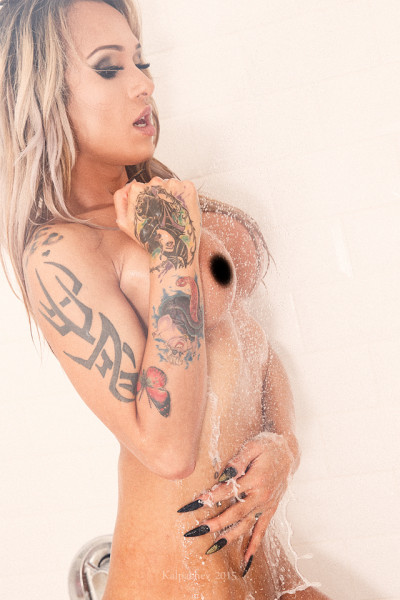 “I moved out of the UK in 1996 and I don’t think I’d met a transsexual before that. The majority of models we’ve worked with have been in North and South America and Asia,” said Grooby owner Steven Grooby.  “Over the years we’ve always been able to source a few UK models who have proven popular, but it became apparent in late 2014 that there were a lot more British tgirls who were now looking to model.”

Grooby has been working with a UK producer for the last few years and thought it would be worth showcasing British trans girls with their own website. The company invited the producer to shoot for the new site while running it from their Los Angeles office.

“The UK is one of the great melting pots of the world, so we aim to bring girls from all backgrounds and cultures, and even include some Northern European models who don’t have another place to appear,” added Grooby. “The European girls do look different to models from other countries and we’re hoping to capitalize on everything that’s cool and unique about the UK culture on this site.”

Founded in 1996, Grooby is based in Los Angeles and is the leading producer of transgender erotica. Operating over 30 membership websites, the company has numerous popular DVD lines released with Third World Media and operates the GroobyNetwork.com, which gives models an unique opportunity to own and manage their own solo site. For more information, visit Grooby.com.

The only UK TS Adult Site

Compatible with all Devices

Welcome to the Ineedescort.co.uk - TS TV Transgender directory and Transsexual classifieds for London and UK. This website is dedicated to TV TS Transsexual Escort adverts. The website is NOT an agency. It is a TS trans escort directory and classifieds, where every transgender escort could register, post FREE advert and offer tgirl escort services. Here you will find the most beautiful, horny, sexy and Real Transsexual escorts in London and UK. Both independent and Agency listings and adverts.
If you are transsexual, TV, TS or tgirl escort and would like to add an advert - it is FREE and no charge. 24/7 Support, Available NOW section. You can refresh and move to the top your tgirl escort advert as much as you like, any time - for FREE. If you like the website, you can share it with your friends.
We are based in London, UK and we are proud to work and support Transgender escorts. As we are constantly improving our website, we will be happy to receive your feedback, suggestions, or any ideas that could make the website better for use. Please do not hesitate to contact us and share your opinion.